Keeping a book consistently interesting is hard! One of the best ways to keep readers engaged is to create conflict in a novel. This probably not news to you, but that doesn’t mean fresh conflict is always easy to come by.

Here are four failsafe techniques that I always circle back to when to I need to create conflict in a novel:

I know this seems obvious, but it’s so often overlooked! The easiest way to create conflict in a novel is to make your characters disagree. This applies to your main characters too, not just your protagonist and antagonist/villain. Traditionally when we create secondary characters, their purpose is to support our protagonist, but that doesn’t mean they have to agree with our protagonists all the time. Tension between the characters we’re rooting for not only makes the story more interesting but also more realistic.

For example, let’s say you’re writing a crime novel and your core characters are gearing up to go after your bad guy. It’s nice for your characters if they’re all on the same page about their plan of attack, but isn’t more interesting if they disagree? And doesn’t it add more uncertainty if readers have to wonder if the character(s) who disagreed will stick to the plan going forward?

You can use this technique at any point in your book that feels flat–not just the end. The level of disagreement can be up to you and based on your story’s needs.

For the most part, everyone has a reason to keep a secret and everyone has a reason to lie. No matter how big or how small, secrets and lies are almost always guaranteed to shake up your plot. Once the secrets and lies are revealed, you’ll have characters who are likely to feel betrayed and/or your plot will be thrown into a new direction based on the new information.

This is a good technique to use if you need your characters to learn new information at a specific point in your plot. It also makes the liar/secret keeper a much more interesting character. And by doing so, creates conflict on both a plot and character level.

There’s an endless pool of conflicts for families/family members. Even ones who get along well (and even more for ones who don’t).

Side note, I think this conflict is especially fun with a character who’s more private. A family member can reveal a lot about a character just by existing in a scene, which will make your private character uncomfortable and cause conflict from the start.

4) Give your characters exactly what they don’t want

This can be small or large, depending on the size of the conflict you’re looking to create. The principle is the same either way; if there’s something your character desperately wants to avoid, force them to confront it.

For something smaller, it can be a simple as they have to go to a party they don’t want to go to after a bad day. Maybe their bad mood will force a too honest conversation. For something larger, maybe some of the parties guests include people who tormented your character in high school.

This is another option that’s pretty open, but the cool thing about it is that by taking the time figure out what your characters don’t want, you also add a layer to them and get to know them better.

I hope this gives you a good idea of how to create conflict in a novel!

I like these conflicts because I think they can be used in any story to shake things up, push your characters, and keep your story interesting. They’re the perfect go-tos when you find a scene or entire section of your book that needs a lift. Also, in order to make these methods work you have to really understand your characters, which means you get to know them better as you work. If you’re looking to take this to the next level, check out this post on how to write a tight scene.

Now it’s your turn: How do you like to create conflict in a novel? Do you have any go-to conflicts to share? Tell me all about it in the comments below! You can also let me know what you’d like to see covered more in the future. 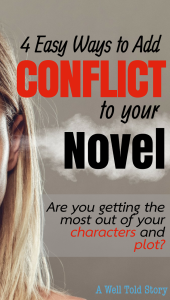