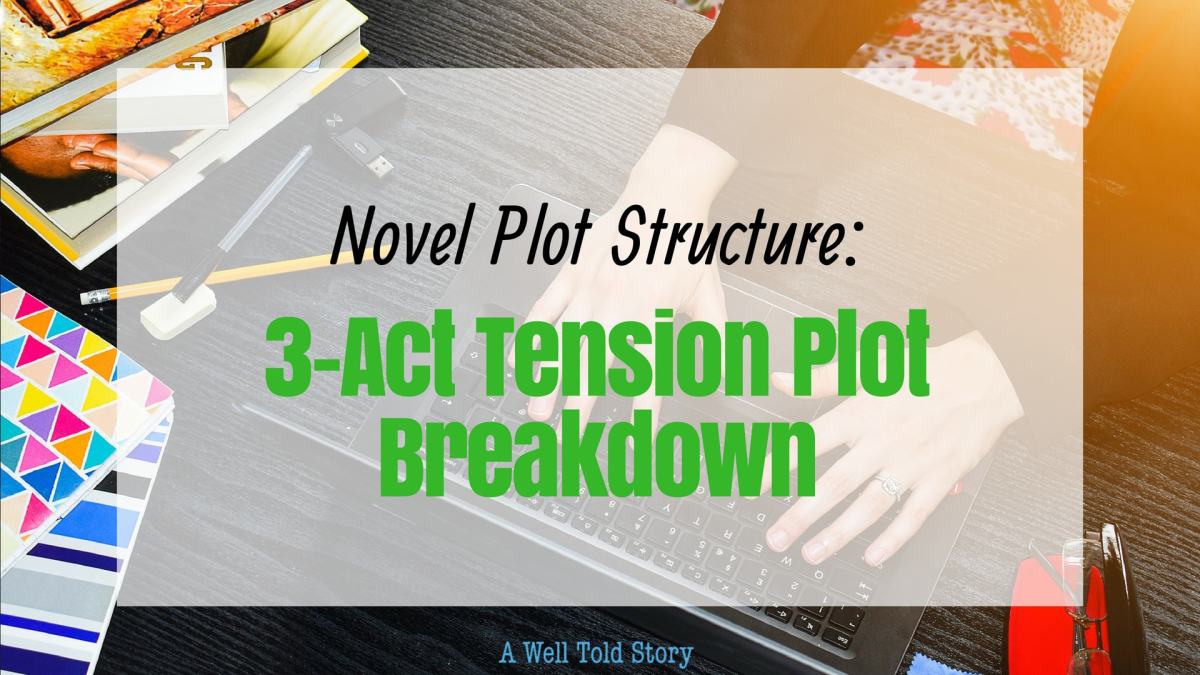 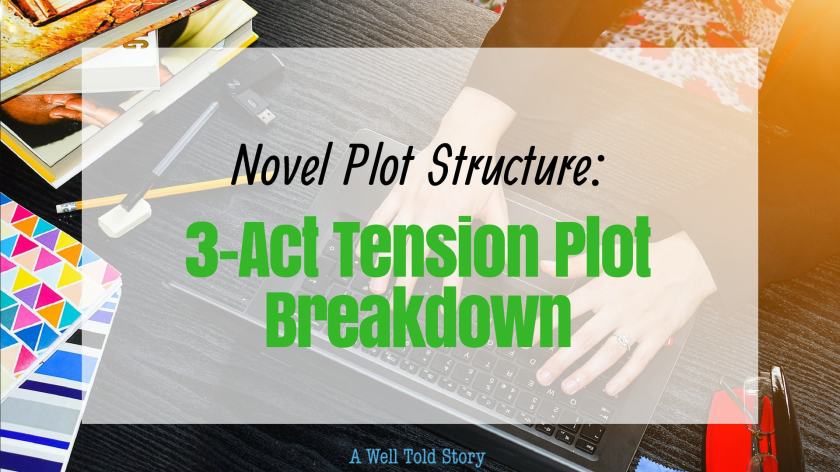 Today I wanted to introduce you to my favorite plot structure–the 3-Act Character Arc and Story Structure. This is my favorite structure because it actually focuses on character as much (if not more than) it focuses on the plot. It also adds emphasis on raising the tension throughout your story, which is something I’ve found to be particularly helpful. This was passed on to me by one of my writing instructors, but it originally came from Peder Hill.

Since Peder has already given a thorough breakdown of this plot structure on his site, I’m going to focus on how I use each aspect of this structure to give you some idea of how it can help you and your story.

This act is fairly short, straightforward, and similar to what you’d see in any other plot structure. This is where you set up what is ‘normal’ for your character before ending the act with your inciting incident, which kicks your story into action. Since this plot focuses on tension, it also encourages you to get into your story pretty quickly. As you can see from the chart, Act I wraps up less than a quarter of the way into the story. Since you don’t have a lot of time to establish your world and characters, it may be tempting to tell your reader absolutely everything–at least, I know it is for me.

Instead, what I’ve found helpful is to figure out what your readers really need to know to understand what’s going on with your characters now, in these opening scenes, and get us right into the action. You can share more information down the line when it’s relevant. Using this structure has helped me focus on what my audience needs to know to enter my world and nothing more, which has made it a lot easier to avoid info dumping.

This is the meat of your story. The majority of the growth and development is going to happen here. Most plot structures would consider this the “rising action” of the novel, but this model calls those actions “points of crisis.” As you can see, once we get to the peak of a crisis point there’s a drop in tension after. This gives your audience a moment of relief. However, the tension level after that drop never goes below the previous crisis point. This ensures that your tension continues to rise as your story moves on. I’ve found that thinking about my story like this helps to keep the middle of the book from dragging. The end of this act should be when things are most fragile for your character–but also when their goal is within reach. It’s the “so close, but yet so far” moment that leads to your climax.

More on the Points of Crisis

These points are basically why I love this structure so much. This is also where the focus on tension seriously comes into play. As you can see in the chart, the middle act consists of four points of crisis. These are four major events that need to happen to your character to get you closer to the climax. These points are paced relatively evenly throughout the book, which I find helps me pace my story pretty evenly.

Having these crisis point spaced out has also been really helpful in my overall process. I’ve learned I work better when I’m writing towards a particular story moment. When I’m early in the book, the climax is just too far away for me to focus on. Having a point that’s much closer keeps me motivated and moving forward.

Also worth noting: I’ve found that four points of crisis work really well for me, but that isn’t a rule for this structure. You can have as many or as few crisis points as you/your story needs.

This act is made up of two core components: the climax and the denouement. Typically my climactic event takes anywhere from 3-5 chapters. And since I’ve had my points of crisis leading up to that moment the entire book, it often seems to come together very organically.

As for the denouement, I do my best to keep it as short as possible. I shoot for no more than two chapters, but if I can, I’ll do it in one. If you look at the chart, the denouement is a steep drop after the climax, which is what always encouraged me to keep it short. Two common thoughts I’ve heard from people after they’ve read my books are: 1) They found themselves running out of pages and couldn’t imagine how everything was going to wrap up so quickly–and then it did. And 2) “That’s it?” but in a good way–as in, they want more.

This is the quick denouement in action. You don’t want to end your story abruptly, but you do want to leave your reader wanting more. Tying up loose ends and getting out of your story as fast as you possibly can is how you make this happen.

Peder adds a lot of emphasis on a character’s emotional journey, which was part of what drew me to this structure in the first place. However, I also found it to be equally helpful when considering the plot. Peder argues that if you focus on character, the plot will emerge on its own. This has proven pretty true for me. But once the plot does emerge, this structure can also be help refine it.

Once I know my character’s journey, I make it a point to tie those events into the plot. Ideally, when I’m finished, each crisis point will raise the emotional stakes for the character, as well as advance the plot and get me closer to whatever I’m unraveling. If you want to learn more about how I do this, check out my post on How to Make Plot and Character Work Together.

That’s it for this one! I hope this plot structure helps you write a killer novel!

Now it’s your turn: Do you have a favorite plot structure? What do you think of this one? Do you think it will help to think about your stories like this? Tell me in the comments! You can also let me know what you’d like to see covered more in the future.