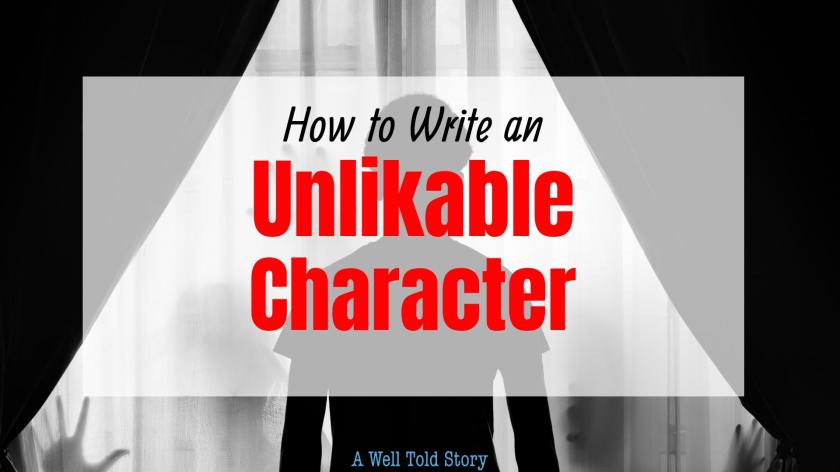 First, what is an unlikable character? There are probably a few similar definitions out there, but I’ve always thought of them as characters I wouldn’t want to be friends with or invite over for dinner. Maybe they’re the “mean girl,” destructive, or self-destructive–whatever the case may be. The bottom line is, they’re not someone the average person would choose to spend time with if they were to meet in real life.

I’ve seen a lot of talk about unlikable characters in my time as a writer, and it’s something I’ve thought a great deal about. It’s come up in workshops, in rejection letters, and even in reviews of some quality books. Traditionally, it’s seen as a negative note; “This character is too unlikeable.”

I think there’s a flaw in this note. To me, it seems like it’s missing the true character issue. I don’t believe characters always have to be “likable” but I do think readers need to either relate to the character or understand why the character acts the way they do.  To me, understanding a character is essential. Relating to them is nice, but I don’t necessarily need that in order to enjoy the story.

So, if you’re writing an unlikeable character, or if you’ve ever gotten a “too unlikeable” note, here are three tips to consider:

1) Make sure you understand the motivations of your unlikable character

If you’re writing a character who’s out of control just because that’s how they are, then they’re not going to come across as very believable. In real life, everybody does stupid things and everybody makes bad decisions. But we always have our reasons. The same should be true for your character. If your character can’t help but be destructive, there has to be some underlying issue. It might be inherently psychological or it could be that something happened to make them that way. Either way, you as the writer have to understand why they behave the way they do.

2) Give them redeeming qualities

People are very rarely one-sided, so it can be difficult for a reader to understand a character who is. If you have a character who is constantly making bad or selfish choices, give them another side to complement that. Maybe their life and relationships are a hot mess but they’re an amazing parent. Maybe they do some immoral actions for the sake of someone worthy. Or maybe they have a big secret they’re carrying around that would in some way explain their actions. There are a lot of directions you can take this. If you’re having a hard time, consider what or who your character cares about and why. The “why” might point you in the direction of something redeeming. These traits will make your character more interesting and help to draw your readers in–whether they like them or not.

However, in order to pull this off believably, you need the elements above to be working as well. If your character has no redeeming qualities or believable motivations, then these understanding characters are going to look like doormats who unnecessarily put up with the unlikeable character. No one will come across as understandable or relatable, which won’t help your story or your character.

I hope this helps you write your unlikable character!