This is a post I hesitated to write. I don’t want it to come off wrong or condescending to non-writers, but I (obviously) decided to write it because I have been stuck in far too many conversations with non-writers who just say the wrong things. They often don’t mean to, but that doesn’t change the fact that it happens.

I also decided to write this post because I know that writing is a really weird and unconventional thing to do. It’s also something that, in most cases, is hard to understand unless you’re a writer or creator yourself, which means it can be hard for non-writers to know how to have a conversation with a writer about their work. I hope that this is ultimately helpful and that it’s something writers can share with non-writers (or post on Facebook for their non-writer friends to find).

To the non-writers who have found their way here, welcome! I hope this helps you connect with the writers in your life. But keep in mind, this is just a guide. All writers will like and dislike certain questions. This list comes from my personal observations and conversations I’ve had with other writers, but it’s by no means a definitive set of rules. Also, if you’re a lover of books, movies, stories, and creativity, there’s a good chance you don’t need to worry about any of this. This post is mainly for any non-writer who has felt completely at a loss when talking to a writer about writing.

Without further ado, here are the dos and don’ts of talking to writers about their writing.

Ask about the writer’s current work in progress

I think it’s always okay to ask about a work in progress, but know that some writers don’t like to talk about their work while they’re working on it. If your writer is up for talking about their WIP, you can ask them about the plot, the characters, their writing process, their inspiration, etc. If they’re not up for talking about it, respect that and don’t take it personally that your writer doesn’t want to share. The story may be very personal, or it could be such a disaster that the writer wouldn’t even know where to start. And sometimes, not talking about a WIP is simply a part of the writer’s process.

If you know a writer who has a book out, definitely ask them about it. I have yet to meet a writer who doesn’t like to talk about their published work. This includes self-published writers! Ask them the same types of questions you would for a work in progress. You can also ask about the publishing process, working with an editor and things like that. There are very few questions that aren’t okay to ask about a book at this stage. And if you have a writer who has finished a book but hasn’t published it yet, definitely ask them about it too! Celebrate the accomplishment of finishing a book. It’s a big deal, even if it’s not published yet.

Ask about the writer’s general process

Writers write because we love it. Even when it’s going badly, we love it. So taking an interest in a writer’s process is an almost guaranteed way to talk to your writer about their work (even if they don’t want to get into the specifics of what they’re working on). You can ask about their inspiration, their research process, their brainstorming, and drafting. If you’re not much of a writer and feel like you don’t really know where to start, you can simply ask them what their process is. Then ask any follow-up questions as needed.

Accept if your writer doesn’t want to talk

Writing is often very personal and there are plenty of reasons why a writer might not be comfortable talking about any aspect of their work or progress. It’s good to show interest, but please don’t push your writer into sharing if they don’t want to.

Regardless of how much or little you talk about a writer’s writing, be encouraging. It doesn’t matter if your friend is published or working on their first book. They are living their dream, and they’re taking on a challenge that very few people would ever dare to try. Every published author can point to the people who always believed in them and they can point to the people who didn’t. This is your opportunity to put yourself on the right list.

Don’t ask how the work in progress is going

Typically, a book is a mess until it’s not. It may be that it’s bad, or it may be that it’s so far away from what we want it to be in the end. Even if it’s going well and we’re enjoying the process, we often have a crap ton of work ahead of us, which can be frustrating. So talking about how it’s going can be a stressor for your writer. Rest assured, if it’s going well, you won’t have to ask. That kind of information will most likely be volunteered!

If you know a writer who finished their book and is going through the process of trying to get their book published, please don’t has how the process is going. This is, quite frankly, the worst part about writing. There is a TON of rejection. Like, on a daily basis. It can be incredibly demoralizing and the only thing worse is having to tell people how often you’ve been turned down. If you know your writer is shopping their book, and you really want to check in, try framing it in a way that shows support. Something like, “You’ll tell me when you have good news to share, right? I know it’ll happen for you.” is perfect. This way you can get a sense of if your writer is still working through this process while letting them know you care and believe in them (and without making them talk about all the rejection sitting in their inbox).

Don’t ask how book sales are

If your writer is published, there’s no reason to ask about book sales. These numbers are largely outside of the writer’s control. Because of that, they can be a source of stress for a lot of authors. Beyond that, what it means to have “good” sales varies from book to book and doesn’t mean very much to anyone outside of publishing. This is another area where if we have good news to share, you won’t have to ask–we’ll share it.

I was writing for ten years before I signed with my agent and sold my first book. Between the three books I queried, I probably got rejected around 500 times. Despite that, at no point did I ever consider attempting to self-publish. Why? Because self-publishing is HARD. Sure, it doesn’t have the same gatekeepers as traditional publishing, but it has, like, four times the amount of work. Everything businessy and promotional a traditional publisher does for its authors, self-published authors have to do for themselves. And they have to do it without the reach and distributors that major publisher have. They may not have the same vetting a traditionally published author has, but they took their career into their own hands and created the reality they wanted for themselves. That’s not something that should ever be looked down on.

Don’t talk negatively about writing as a career path

This is easily the biggest and most important point on this list. Do not, in any way, for any reason, talk negatively or discourage a writer from writing. Writers live a life in a constant state of uncertainty. We don’t know if what we’re writing is good, we don’t know if what we’re writing will be published, we don’t know if it will make us any money. But we love it. To most of us, that love is worth the uncertainty. And pushing through that uncertainty is key to our success. It is not your job to make us question our goals or directions. Don’t be the reason a future bestseller never gets written. If you can’t find a way to be positive, say nothing. Don’t be negative.

It’s okay if you if you don’t get writing and you don’t really want to talk about it. It’s fine to say, “It’s really cool that you write,” and change the subject. In my experience talking about other things we have in common is better than a conversation that’s painful for all involved. As long as you don’t talk negatively about your writer friend’s work/dreams/goals, you should be good to go!

Non-writers, I hope this helps in some way!

Now it’s your turn: Writers, what have non-writers said/done for you that have been super helpful? And what’s one thing you’d wish they’d stop doing? Non-writers, what’s one aspect of writing you just don’t understand? Was there anything I didn’t cover that you’d like to know more about?  Tell me about it in the comments! 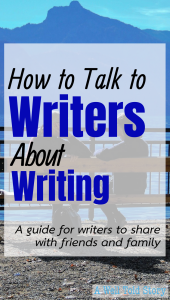