I’ve taken A LOT of writing classes in my life and I’ve only had two bad ones. Yet, I got one very valuable lesson out of each of those less-than-awesome classes. One of those classes introduced me to the idea of typing my second drafts completely from scratch.

I’ll admit, I was super skeptical of this approach. Typing a first draft always felt like a lot of work. The prospect of starting with another blank page was in no way appealing. But I happened to be struggling with a second draft at the time and figured it couldn’t hurt to try. So I did. And let me tell you, it totally opened up my entire drafting/revision process.

Here are five ways starting my second drafts from scratch has helped me (and how it may help you too):

Just because I write my second drafts from scratch doesn’t mean I trash the first draft. In fact, I actually print my first draft out and keep it next to me the entire time. I refer to it, and if there are scenes or chapters I want to include I retype them (and often write them better).

When you write a first draft, you have nothing. Maybe an outline, if you’re an outliner, but that’s it. But if you type your second draft from scratch, you can write with the reckless abandon of a first draft while having scenes and chapters as a safety net to add and modify as needed.

2) My first drafts are really messy

I have always been a fast and messy drafter. My first drafts are complete and total disasters! I often say my first draft is a lot more about learning what my story isn’t than what my story is. In a lot of ways, my second drafts feel like a second crack at the first draft (if that makes any sense). This process tends to go a lot quicker on a blank page without the old stuff in the way. Beyond that, even if I am keeping a scene or chapter from my first draft, I’m able to clean it up a lot as I retype it.

4) It helps me identify scenes, chapters, and storylines that need to go

Because my first drafts are so messy, there’s a lot that isn’t working, and there’s a lot that I need to let go of. But sometimes, identifying those things can be hard. Before I started this approach, I wasted a lot of time trying to fix boring or out of place scenes. I thought if I revised them correctly, they wouldn’t be boring or out of place. This, however, isn’t always true. Sometimes a scene is boring because it doesn’t belong. Personally, I often get really excited about what I’m writing–even if I know there are things I have to fix. I LOVE experiencing my story with my characters. When I started retyping my second drafts I found there were some scenes that I dreaded having to experience again because they just weren’t all that interesting. This became a very obvious early sign that a scene doesn’t belong and isn’t worth my time. Now, if I get to a scene that I’m not excited to retype and re-experience, it gets tossed or significantly modified.

Sometimes, I was aware that a scene wasn’t worth fixing, but letting it go was hard. In fact, I used to STRUGGLE to fix scenes and chapters that I knew really needed to be trashed because the idea of deleting them was just that painful. (Perhaps you know the feeling?) But when I type my second drafts from scratch, it’s so much easier to let that stuff go because it means I don’t have to retype it! Rewriting and adding a new scene or chapter becomes a refreshing change of pace. And I don’t have to touch the delete button once!

I don’t know about you, but sometimes when I pack for a big trip, it takes me two tries to get everything in my suitcase. The first try usually gives me a better sense of just how much space everything will take up and how it fits together. Then the second try, I have a better understanding of what will fit, what won’t, and the best way to position it all so the important stuff makes it. It also forces me to take a hard look at what I’m bringing and leave the stuff I can live without. I’ve often thought of my first and second drafts like this.

My first drafts give me time with my characters, plot, and world. It also exposes the characters and plot points I don’t actually need, and helps me understand how the ones I do can fit together a little better. Retyping my second draft is a lot like emptying my suitcase and giving myself a clean slate so everything can fit a little better.

I hope this helps you see why typing second drafts from scratch might be helpful!

Now it’s your turn: Have you ever tried retyping your second drafts? Or does it seem way too intimidating? Tell me about it in the comments! 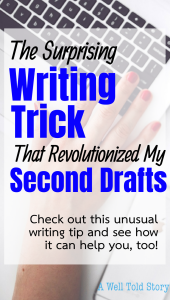