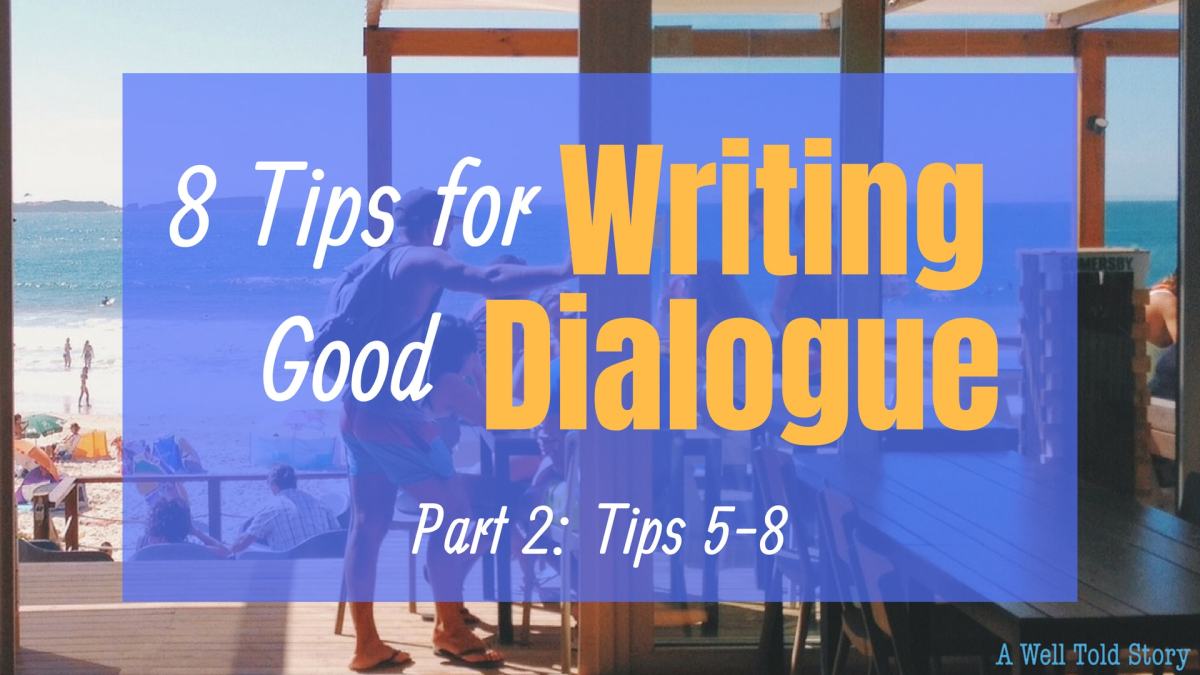 Here’s the second half of my top ips for writing dialogue! ICYMI, last week I set out write about my top eight tips, but it turned out I had more to say about each tip than I realized. Instead of cramming everything into one post, I decided it would be better to split it into two.

I shared my first for tips in last week’s post. Here are the next four:

5) When you’re writing dialogue, make sure it doesn’t sound too real

As much as you want your dialogue to sound as realistic as possible, you don’t want it to sound too real. Next time you’re in a public place, do some eavesdropping. Make a point to notice how much filler and repetition we use in our day-to-day conversations. It’s not uncommon to hear a sentence that goes something like this:

“Like, I’m driving down the road, and this guy just, like, came out of nowhere and completely cut me off! And I was like, ‘hello! I’m driving here!'”

I know when I talk, I use “like” and “just” a lot more than I need to. And while you can definitely drop words like this into your dialogue to add personality, if use those types of words at the same frequency that we use them in real life, they start to interfere with your storytelling. The reader shouldn’t have to sift through filler words and repetitions to figure out what your character is trying to say. If you do this consistently, you’re going to lose your reader.

Additionally, if you have a character who has a stutter, or an accent, or any kind of verbal tick, I would advise against those elements when writing dialogue. Instead, describe those aspects of the character’s voice in the narrative. This makes it easier for the reader to decipher, while still capturing your character’s unique sound.

Of course, there are exceptions to every rule. I think J.K. Rowling did a great job with accents and dialect when she was writing dialogue for Harry Potter. However, if this is a rule you’re going to break, make sure you know what you’re doing and make sure your realistic writing doesn’t interfere with your story.

You don’t always have to say “he said” or “she asked” everytime someone speaks. One way around this is to use a character’s actions to pace your dialogue and to distinguish your speaker. For example,

The fact that the narrator shakes her head in a new paragraph is enough to tell us that it’s the narrator who’s speaking the second piece of dialogue. Using action beats gets you away from using said all the time, and gives you a chance to dig into your character a little bit more by telling your readers about their movements and body language.

7) Your dialogue and narrative shouldn’t echo one another

If you tell your reader something in the narrative, you don’t need to also have your characters say it in dialogue. This is something I see a lot in new writers, and something I definitely did myself. Here’s an example of what I’m talking about:

He wandered around the room and she couldn’t help but wonder if he had any idea what he was doing.”Do you have any idea what you’re doing?” she asked.

Now, this is a simplistic version of this concept, but you get the idea. All aspects of your story need to serve a purpose. If your character is going to echo something your narrator already told us, then what’s the purpose of saying it again in dialogue? Instead, have your narrator describe the situation then have your character vocalize their thoughts. So a rewrite of the example above might look something like this:

He wandered around looking aimless and lost. She cut into his path stomping him dead in his tracks. “Do you have any idea what you’re doing?”

This way we get a picture of the situation. We see that the male character looks a little clueless and that the female character isn’t happy about it, but we also don’t know what she’s really concerned about until she speaks. This gives a purpose to both the narrative and the dialogue.

8) Use character names in dialogue sparingly

I hope this helps you write some awesome dialogue!

If you missed part one, you can find it here!

Now it’s your turn: What’s your favorite part about writing dialogue? What about your least favorite? Tell me about it in the comments! You can also share any of your own tips and tricks! 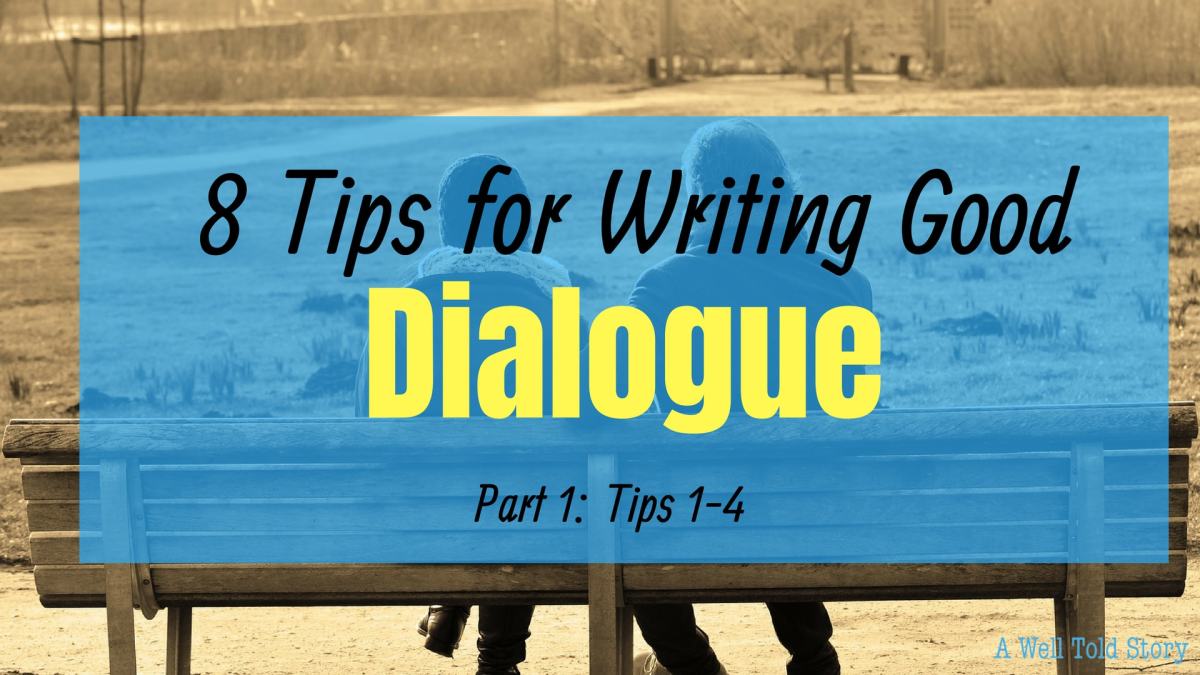 I love writing dialogue. It’s always been one of my favorite craft elements. I’m fairly certain this is in some way connected to my deep love of television, but it’s hard to be sure. 😉 Whatever the reason, I’ve always paid a lot of attention to writing dialogue and it has a very special place in my writer heart.

Originally, this was going to be one post with all eight of my top tips for writing dialogue. But it turned out I had a lot to say about the first four, so it seemed best to split this up into two posts. You can find part two here!

For now, here are my first four tips for writing good dialogue:

1) Stick with ‘said’ or ‘asked’ in your dialogue tags.

There seems to be a point in every grade school curriculum, where students are taught not to use said as a dialogue tag. I definitely experienced this, as did every writer I’ve ever asked. We were told said is boring and repetitive, and we need to pick more descriptive words. This lesson usually came with a cute worksheet that says “Said is Dead.” Then suddenly our characters were chortling and muttering and chuckling, and doing a handful of things with their voice while they talked. This was (and is) a terrible lesson. While word variety in most cases is a good thing, the same cannot be said when it comes to dialogue tags. The point of a dialogue tag is to help readers keep track of who is talking in the least intrusive way possible. Ideally, you want your reader’s attention to be more on the dialogue than the tag.

“Said” and “asked” stay out of the reader’s way. Readers are able to quickly pick up on who’s speaking, while the tags are barely registered. By adding different tags, you’re giving your readers something extra, (and in most cases, unnecessary) to process. This slows your reader and takes them out of the dialogue itself.

Of course, there are exceptions to every rule. In the right situation, you can get away with words like “whispered” or “hissed,” but I would suggest using these sparingly and sticking with unintrusive tags as much as possible.

Adding an adverb to your dialogue tag is often a sign of weak dialogue. You shouldn’t have to tell your reader that something was said “angrily.” Instead, you want to write in a way that makes it clear to your reader that your character is angry. Here are some examples to compare:

1) “You shouldn’t have gone there alone,” she said, angrily.

2) She stood with her arms crossed, glaring daggers at me.”You shouldn’t have gone there alone.”

This is ‘show don’t tell’ in action. Adverbs tell, which is what makes them weaker. The second example paints a picture. We know the character is angry because of how she’s standing and how she’s acting. We don’t need to be told that she spoke “angrily.”

Personal Process Tip: Often when I’m drafting I’ll use adverbs. It helps me get the draft down quickly and reminds me of the emotion I want to express. Then in revision, I’ll go back through and replace the adverbs with stronger prose.

3) Don’t use ellipses in the middle of dialogue

I think every writer has a handful full of technical or grammatical nuances that they feel unreasonably strongly about. Ellipses are one of mine. This stems from a lesson that really stuck with me from one of my former instructors when I was in grad school.

It’s become fairly common to use an ellipsis in dialogue for pacing and natural breaks in speaking patterns. For example:

And while this is totally something you can do, my instructor came to realize that in most instances when an ellipsis is used like the example above, it’s really a placeholder for an action. So when you see those ellipses, the character is actually doing something while they’re talking. For instance, we could rewrite the example above to read:

“It’s just that–” He pressed his fingers to his forehead, searching for the words. “Nothing makes sense in anymore.”

See the difference? When I follow this rule, I’ve found that it adds a layer to the character and the dialogue, and it makes it easy to avoid adverbs. Also, I think it’s pretty true to life. In real life conversations, we may hesitate to say something or struggle to find the right words, but when that happens we are almost always doing something at the same time. We break eye contact, find something else to focus on, bounce our legs up and down, or play with the sleeve of our shirts. So instead of using the ellipsis, let that action pace and pause your dialogue. I think you’ll find that it reads a lot stronger.

4) And speaking of ellipses, avoid them at the end of dialogue too

Similar to the point above, it’s also become pretty common to end dialogue with an ellipsis if your character has an unfinished thought or isn’t stating something strongly. I think this is in part because it’s how we use ellipses when we send text messages and emails, but it’s really not how you should be using it in your dialogue.

I was taught that generally, an ellipsis should only really be used if a voice is trailing away to nothing. So, if your character were to jump out of an airplane while they were talking to someone still on the plane, their voice would probably trail away to nothing. That would the right time to use an ellipsis. But if it’s just that your character has an unfinished thought, then you’re actually better off with a dash.

So, if you find that you’re using an ellipsis because your character is uncertain about what they’re saying (i.e. “I just don’t know…“) you might want to reconsider. If the phrase is a sentence or complete thought, punctuate it correctly with a period. Then it’s your job as the writer to make it clear with tags, actions, or voice description that the phrase isn’t being stated with conviction. I think leaning on an ellipsis in this situation can lead to lazy writing. You’re better off describing how your character sounds than letting the ellipsis do your job for you.

I hope this helps you write some awesome dialogue!

For more tips on writing dialogue, check out Part Two!

Now it’s your turn: What are your thoughts on writing dialogue? If you hate it, what do you struggle with? If you love it, why? Tell me about it in the comments! You can also share any of your own tips and tricks! 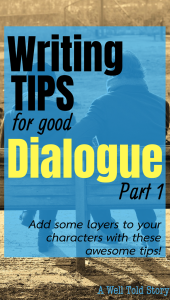